Author of War Songs, Grady Harp is an artist representative, gallery owner, writer of essays and articles on figurative and all Representational art for museum catalogues and for traveling exhibitions, and an Amazon Hall of Fame Reviewer. He describes himself as being ever on the alert for the new and promising geniuses of tomorrow. So I am deeply honored that he posted this five-star review for my book, A Favorite Son: 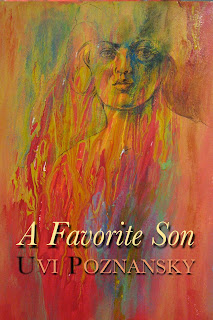 Uvi Poznansky has that enviable ability to push paint and words into that category of combining reality with fantasy, myth with story, tradition with contemporary sidebars. She has ably accomplished that in THE FAVORITE SON, drawing upon the Biblical tale of Isaac and his twin sons by his late birthing wife Rebecca - Jacob and Esau.

Isaac is growing old and his inheritance is to be passed to his firstborn. Therein lies the problem: Esau and Jacob were twins and in Poznansky's version, Esau pushes Jacob to the back of the womb allowing Esau to be the firstborn son. An inimical relationship dwells between the brothers - Esau is big and hairy and a hunter while Jacob is more his mother's son, interested in cooking and in the beautiful clothes and jewelry his mother Rebecca owns. Rebecca (or Becky as she is called in this quasi updated version) favors Jacob and plans the deception of Isaac by designing a goatskin arm form a beloved coat to place on Jacob's arm when Isaac will make the pronouncement of his passing of the inheritance. Or interest, Jacob has already tricked Esau with his cooking wiles and Esau has promised Jacob his inheritance. But as the story develops the sibling rivalry is complicated by the mother's intervention and Jacob is granted the inheritance as well as the love of the father who has always favored his older brother.

What Poznansky has managed to do is include many of the aspects of the lineage of Abraham to Isaac to Jacob and the stories that surround them: in Poznansky's tale the miracle of Jacob's ladder is inserted - and even that happed long after the birthright theft. She manages to bring the story forward by inserting contemporary language (Isaac even promises Rebecca the equivalent of a Rolls Royce!) and in doing so she opens the old story to be instead a lively psychological study of family and of greed and longing for paternal love and more. It works spectacularly well. Would that more of the Old Testament stories could be updated like this then perhaps more children would be fascinated with the abundant mythological stories of the Bible. Grady Harp, January 13

Posted by Uvi Poznansky at 7:19 PM