The most improbable composition you can come up with

What is the most improbable composition you can come up with, I asked myself--only to come up with an answer that could not have satisfied me: 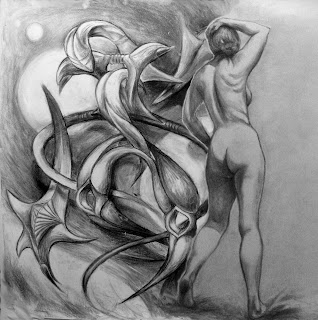 This is a charcoal on paper two-piece composition, attempting to combine two drawings, which I have posted here before: the first in a post called Seaweed as a Source of Inspiration, the second in a post called The minute our eyes met I knew what to do. The reason I find composition so challenging here is because each one of the  original drawings occupied the center of the paper, and so both of them would be fighting to remain the focus of attention.

After several additional attempts I had my heart set on the composition shown below. This I executed as an oil painting. 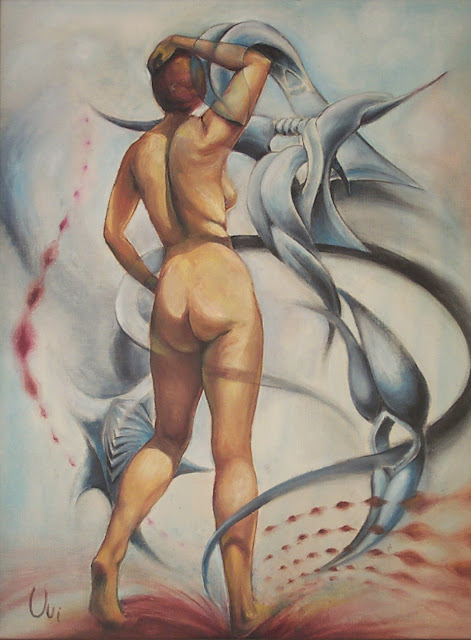 The underpinning of this painting is the idea that you cannot immediately resolve which is the foreground, which the background. Who is dreaming whom? Is the woman imagining the strange sea-creature, or is he imagining her? They appear head to head, but neither one is solid. Each one of them is half-transparent, allowing the outlines of the other one to shine through its own body.

There is only one place you can resolve as 'real', only one place where it is clear that one figure is casting a shadow on top of the other. This place is the woman's right ankle. I left it as the only 'solid' clue to this reality, because it is in this spot that the woman takes a step forward, into this imaginary scene of bewilderment and wonder...
Posted by Uvi Poznansky at 6:40 PM