Are you curious about how a narrator goes about his craft, how he goes through the process of becoming the character, and lifting him from the text to life? I know I am!  Take a listen to David, describing Michal undress on the eve of their wedding.

And now, here are a few thoughts, written by David George, the voice talent for Rise to Power, highlighting the process of becoming David.

On Narrating Rise to Power (The David Chronicles, Vol I)

Looking over the text initially, I see that Uvi Poznansky had chosen to retell the Old Testament Story of King David in modern English - colloquial even.

So my first task was to find the voice that would both respect the ancient classic legend  from the Old Testament and also fit the modern approach Uvi uses to retell it.

Uvi wanted an British english voice. I was raised in London, England so no problem there for the court of King Saul. But the slaying of Goliath was coming up - what was I going to do for the Philistines? Since we were using British English and Philistines today are synonymous with the "uncouth", I chose to go with the British "class" distinctions to separate the tribes. I chose to use a lower class voice to distinguish the Philistines from David and the court of Saul.

I grew up in the East End of London.

We were an immigrant family from Acre, Israel, arriving in London in 1955. When I was five years old we  experienced what I imagine most immigrants do on arrival to a new country.  As small a country as the UK is, there seem to be millions of accents incubated over a long history prior to the industrial revolution and the arrival of modern travel.  We were born British subjects and always spoke English, but you had to have a good ear to survive and we became really good mimics of the accents of the children we were trying to assimilate with.

So...back to my point. The Philistines would sound like "Cockneys".  No offense, some of the best and smartest people in the world are from the world's working classes but this was a way of using prejudices and preconceived notions to differentiate the "Philistines" from the court of Saul.

I like to act the parts of dialogue in a variety of characters because I think droning on in one's own voice for 8 -11 hrs can be tedious for the listener.

For me, having the opportunity to narrate a novel is a huge issue of trust on the part of the author.  In order to respect that trust, I have to find a way to bring as much passion as I can, to match the author's passion in having taken on the work in the first place.

I have to love the work.

I liken this to a singer who finds their own way with a song in order to respect the writer's work and yet bring their own truth to the interpretation. Doing a narration is no different.

What about female characters?

Some writers have women protagonists and prefer a woman to narrate their work. Makes sense.

People want to know "what do you do for a female character?" For me a slight shift in tone to "feminize " the voice without going into caricature works well.  With Bathsheba in Rise to Power - I chose to read all her lines as an invitation to stay and make love with her - even when she tells David to  "Go away!" the subtext is "Please, stay".  There are many different women with different histories and motivations and all of that needs to find its way into the delivery of the line.

Personally, making an audiobook come alive for the reader is like making a movie with a small cast or a cast of thousands! A hybrid of a stageplay/movie/Radio Drama .  All...with one voice. 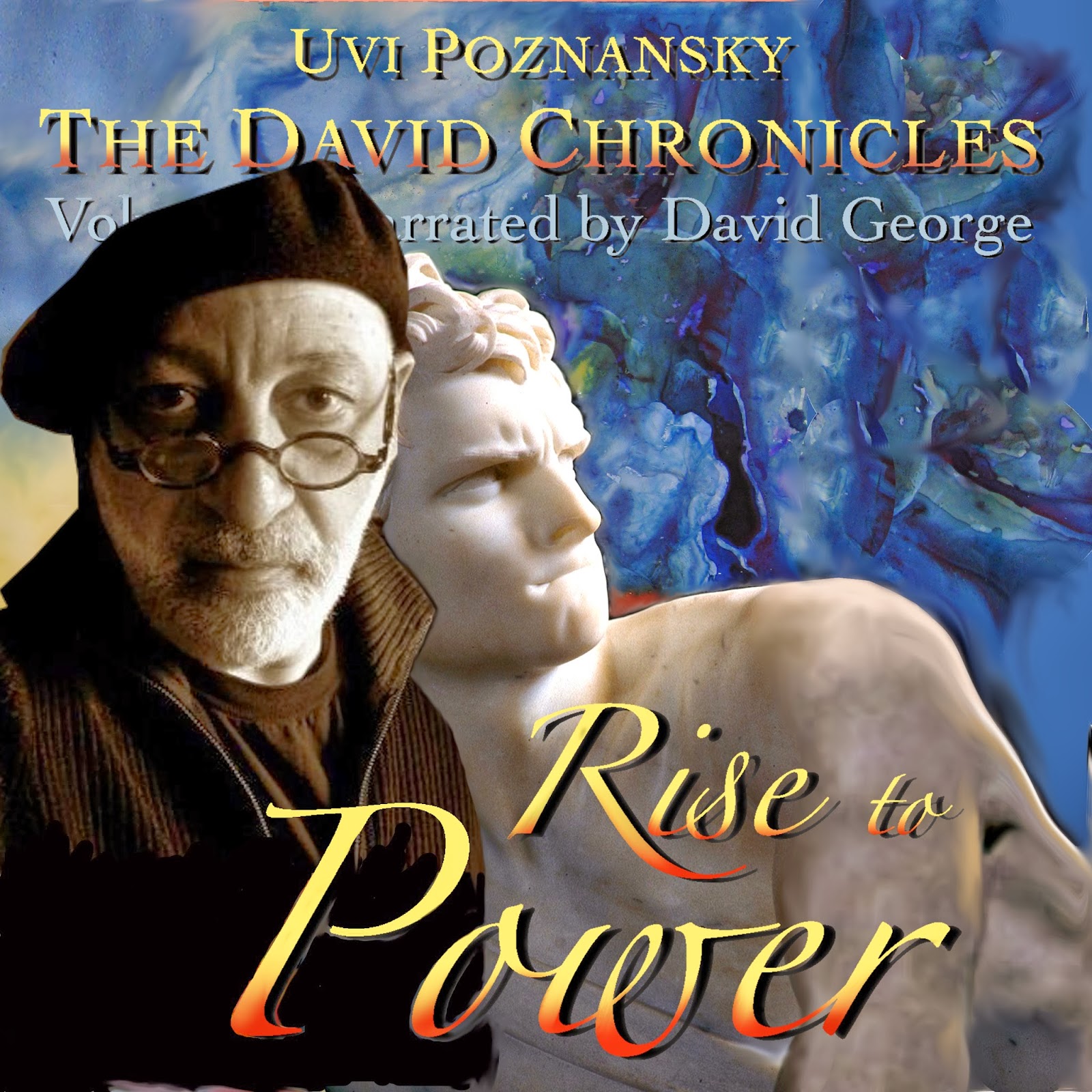 “I am still in awe just how much there is to the story of King David”
Posted by Uvi Poznansky at 2:28 PM