Further insights into the life of King David through artists’ eyes

Author of War Songs, Grady Harp is an artist representative, gallery owner, writer of essays and articles on figurative and all Representational art for museum catalogues and for travelling exhibitions, and an Amazon Hall of Fame Reviewer. He describes himself as being ever on the alert for the new and promising geniuses of tomorrow. So I am deeply honored that he has posted this five-star review for my art book, Inspired by Art: The Last Concubine: 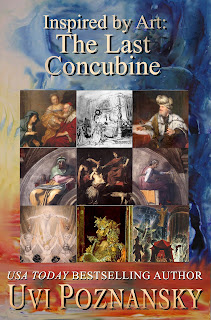 Uvi Poznansky dons another Technicolor coat in this latest series of books, always raising the bar for her high standard previous achievements. Originally from Israel where she studied Architecture and Town Planning then moving to the US where she studied Computer Science and became an expert in Software Engineering, Poznansky managed to combine the design elements of two studies into unique formats. And she has accomplished the same with the other side of her brain - making visual her ideas (she is an accomplished painter, drawer, and sculptor who has enjoyed exhibitions both in Israel and in California, her present base) and making words in poetry and in short stories and children's books.
Uvi’s 9th volume in her inspired by art The David Chronicles is titled THE LAST CONCUBINE. For those less familiar with the story of David this book about Abishag some recapping of her part with David may help: Abishag was a young woman of Shunem, distinguished for her beauty. She was chosen to be a helper and servant to David in his old age. Among Abishag's duties was to lie next to David and keep him warm; however, David did not have sexual relations with her. The Hebrews...believed that the fertility of the soil and the general prosperity of the people were bound up with the fertility of the king. David by this time was old and decrepit and his sexual vigor is called into question. Attempts are made to remedy the situation. The first cure is to heap clothes upon his bed in order to secure such physical heat as might render him capable. When this fails a search is made for the most beautiful woman in the land. Great emphasis is placed upon her Abishag's charms. The fact that the king did not have intercourse with her is decisive in the story. If David was impotent he could no longer be king. After David's death Adonijah (David's fourth and eldest surviving son), persuaded Bathsheba, Solomon's mother, to entreat the king to permit him to marry Abishag. Solomon suspected in this request an aspiration to the throne, and therefore caused Adonijah to be put to death Some scholars point to the possibility that Abishag is the female protagonist in the Song of Songs.
Uvi has published an absorbing book series – The David Chronicles – and now is curating art collections to enhance the pleasure of her books’ stories. This volume is one of the most complete collections of art from ancient through renaissance to contemporary in drawings, paintings, sculptures, etchings – works by Gustave Doré, Schwebel, Pedro Américo, Frederick Goodall, Govert Flinck, Chagall, Nicolaes Antoni Flinck, Ferdinand Bol, Jan Lyken, Michiel vander Borch, Luca Giordano, Valentine de Boulogne, Henri Lindegaar, Michelangelo, Gustave Moreau, James Tissot, Aert de Gelder, Ernst Fuchs, William Blake, Michael Jessing, Salvador Dali, Moshe Tzi Berger, Leonhard, Roberta Weir, Hans Sebald Beham, Edward Hull, William de Morgan, Mandy Sand, engravings, church windows, illustrations unnamed, coins, stamps and more - some well known, others – discoveries.
The art is arranged not by artist but instead by events regarding the life of David. It is a majestic, learned, beautifully designed book that carries a lot of instruction, entertainment, as well as visual pleasure. But then that is what Uvi is all about! Grady Harp, April 17
Posted by Uvi Poznansky at 2:41 PM