Love the story of David? The David Chronicles: Trilogy describes the life of one of the most fascinating figures in history, starting from his youth, his ascension to the throne, and his struggles with his heirs during his old age:
Rise to Power:
Here is the story of David as you have never heard it before: from the king himself, telling the unofficial version, the one he never allowed his court scribes to recount. Rooted in ancient lore, his is a surprisingly modern memoir.


Notorious for his contradictions, David is seen by others as a gifted court entertainer, a successful captain in Saul's army, a cunning fugitive, a traitor leading a gang of felons, and a ruthless raider of neighboring towns who leaves no witnesses behind. But how does he see himself, during this first phase of his life?

With his hands stained with blood, can he find an inner balance between conflicting drives: his ambition for the crown, his determination to survive the conflict with Saul, and his longing for purity, for a touch of the divine, as expressed so lyrically in his psalms?

A Peek at Bathsheba:
Against the backdrop of wars, raging within the land and without, David is growing into the mantle of leadership. Between his anointment as a tribal king and his anointment as the king of all of Israel, he uses wisdom, cunning, and his own understanding of the forces of history, aiming for high ideals: stopping the bloodshed, uniting the nation, and bringing about healing and peace.

But then, having reached his peak, David falters. He makes a serious error that threatens to undo his political success, and cost him not only the adoration of his people--but also the sense of being sustained by a divine power. That error is the most torrid tale of passion ever told: his deliciously forbidden love for Bathsheba, followed by his attempt to cover up the ensuing scandal by sending her husband--who serves him faithfully in his army--to his death.

The Edge of Revolt:
David loves his sons. The last thing he expects is that they will topple him from the throne. Who among them will remain by his side? Who will be not only loyal, but also eager to continue his legacy?

For now, David remains silent, even as Amnon rapes Tamar, even as Absalom lures Amnon to his death. In families other than his, such crimes may be concealed. But when they occur in the king's family, they affect matters of the state, and result in his escape from the son he adores. Will he finds a way to quell the revolt and come back to the City of David? 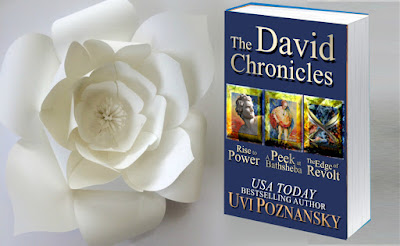 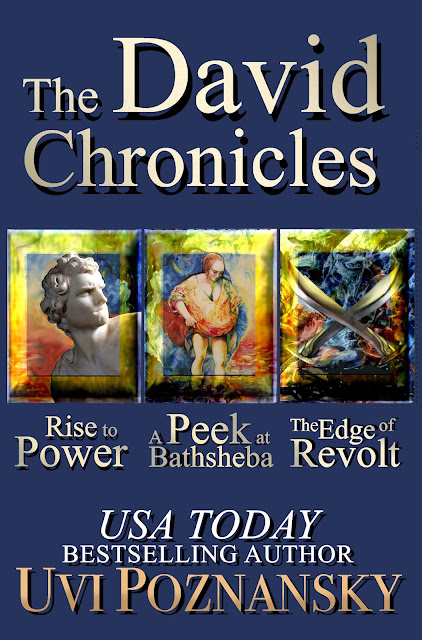 Posted by Uvi Poznansky at 7:49 PM