Do No Harm: The Marburg Mutation by Allen Kent

A few minutes before 3:00 a.m., the man residents of Ålesund, Norway, referred to as den Serbisk, the Serbian, slipped quietly from bed. He had showered and shaved the evening before and dressed quietly in the half-light of the Norwegian summer night that filtered through the open windows of the Hotel Brosundet. Below his window, the silent harbor mirrored the Ålesund fishing fleet like a tarnished silver mirror. In an hour, men would begin outfitting the boats. Gulls would wheel and squawk over the departing fleet. He needed to be gone by then, headed to the airport. But on the way, there was cleanup work to be done.
Before leaving the room, he paused to admire the figure of the young woman who remained sound asleep on her side, the sheet covering her to the waist. He allowed his eyes to linger for another moment on the breasts that were so beautifully accented by the white patches of her bikini line. She had been among the best of his Ålesund conquests. He had her number and would call her again when he returned to the city.
The Serb took the elevator to the main floor, assured the night clerk that the room should be left on his card and that the lady would check out before eleven, then retrieved his rental from the small harborside lot. Five minutes later, he descended into the tunnel that crossed beneath the fjord to Ellingsøya Island. Upon exiting, he turned right past the sleeping village of Hoffland and drove east along the coastal road until a gravel lane turned away from the water’s edge up into the pines. The lane skirted the side of a steep, rocky hill, then looped back toward its crest. Near the top, he braked in front of an ornate wrought-iron gate.
Leaning from the window, the Serb entered a six-digit code into an electronic pad that stood on a black post beside the gate. The barrier swung silently inward. He eased the vehicle forward through the wall of heavy gray stone. The inner drive was paved and curved left through trees that circled a small lake to the front of a dark two-story country manor of the same smoky-gray rock.
As he stepped from the car in front of steps that led to an arched portico, the wide beam of a flashlight circled him from the far edge of the house. A hoarse voice demanded in Norwegian, “Who is there?”
“It is just me, Geir,” the Serb said in English to the caretaker. “I need to pick up a few things before flying back to Frankfurt. I will be about an hour and will close the gate when I leave. My flight is at eight.”
The ancient caretaker grunted an acknowledgement and turned back toward a cottage that was no more than a dark impression among the trees beyond the drive. The Serb unlocked and entered the house, closing and latching the door behind him. Down the central hallway, a door opened beneath a staircase onto steep steps that descended into a musty half -basement. By the light of a single dim bulb, he made his way through a scattering of old outdoor furniture and lawn statuary to a row of rough wooden shelves. Pulling a stool from beside the stairway, he climbed carefully onto it, pushing upward on what appeared to be a section of ceiling beam. The shelves in front of him slid forward and to the side, revealing an aged steel door with a wheel-combination lock and lever handle. He lowered himself heavily from the stool and knelt before the door, twirling four numbers into the lock. As he forced the handle downward, the man rose to his feet and pushed against the massive door.
The metal plate swung inward into a brightly lit stainless-steel prepping station with two showerheads to his left suspended over a circular drain. To his right, an open closet held three white hazmat suits and, on a shelf above, contamination masks and goggles. The Serb stripped to his underwear and donned the largest of the suits. He carefully taped his wrists and ankles, then pulled on mask and goggles. When certain he was properly protected, he pushed through a second metal door into a long, narrow observation room. A tightly sealed full-wall window separated him from another stainless-paneled cell beyond.
This third room was a twelve-foot box, furnished with a plain metal table, wall-mounted bench, and steel toilet and sink. On the table, assorted fruit browned in a wooden bowl. A partially eaten loaf of bread and block of white cheese sat on heavy paper plates. The emaciated body of a woman faced him on a thin mattress that covered a low cot attached to the back wall, her corpse seeping thin red liquid from weeping blisters that covered most of her exposed skin. Dried blood covered her chocolate face, staining it even darker where fluid oozed from her eyes and nose. She wore only a pair of tight red shorts. What had been a white tank top lay beside her on the floor. Little of the white remained, a few unspoiled islands in a sea of reddish brown. The floor beside the cot was splattered with dark, bloody vomit.​

Excerpt from The Marburg Mutation by Allen Kent 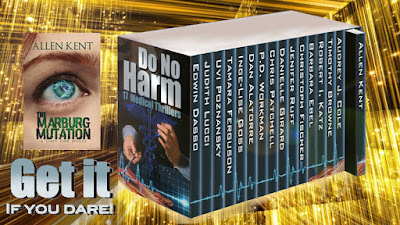 Posted by Uvi Poznansky at 7:03 PM