Do No Harm: Only Wrong Once by @Jen_Ruff

The dead lay unattended amidst bombed-out buildings on streets coated with ash and blood. Beside a pile of rubble, Yesenia spotted a body wearing a blue and white hijab, one leg bent at an impossible angle. Her neighbor, before their homes burned, had the same hijab. Yesenia squeezed her eyes shut and clutched her mother’s hand. Normally, she was much too old for hand-holding, but anyone could become lost in the shoving crowd and nothing was normal anymore. As far as Yesenia could see, thousands of other Shiite Muslims from her village were packed together, waiting evacuation. Refugees. That’s what they were called now. Buses would soon arrive to carry them to safer territories. They huddled under blankets, clinging to valuables. Yesenia pressed her shivering body against her mother’s leg for warmth. Eyes lifted to the sky, her mother prayed to leave the war-torn city alive, before the next explosion. She’d been praying almost every hour for months. So far, it hadn’t done any good.
Cheers erupted when the buses, dozens of them, finally arrived. An elbow hit Yesenia hard, sending a sudden pain across her cheek, as someone edged in front of her mother. Yesenia was just as desperate to reach the door of the bus, climb the steps, and end up somewhere safe. Anywhere else but here. But so many people were waiting. Yesenia didn’t think the buses could possibly hold enough seats for all of them.
The escalating rumble of trucks filled the air, louder than the mob swarming forward to load the buses. In the distance, a rising cloud of dust indicated a convoy approaching. Yesenia held her breath, waiting to see the colors. Green for good, gray or black for bad. They were all evil, as far as she was concerned. They had destroyed her city and her life one nightmarish day after another until both became completely unrecognizable. Her mother pulled her toward the bus, even though there wasn’t room to move forward. Her scarf caught on something and yanked away from her neck, but she snatched it back in time. The engines grew louder, joined by angry shouts. A quick glimpse on her tiptoes revealed the front of a truck.
Gray.
Her heart sank.
"Hurry, Yesenia,” said her mother. “Don’t let go of me.” Together, they pressed into the mass of unwashed, pungent smelling bodies and tattered, flowing garments moving toward the buses.
The men from the trucks, ISIS or government? She did not know or care. They fired their rifles into the night sky, scattering the refugees. Looking like crazed demons, they jumped from the truck beds with flaming torches and ran along the line of buses, flinging streams of gasoline, and setting them on fire. Refugees rushed off the buses, pushing and shoving, shrieking and screaming, some on fire. Desperate souls searched for space to roll on the ground and extinguish their flaming clothes. Able to escape the fiery inferno, Yesenia’s mother pulled her daughter backward causing Yesenia’s ankle to twist and give out. Yesenia dropped her bag and saw it disappear under a stampede of boots. She wanted to scream too, but she could only open her mouth and stare wide-eyed as the flames leapt from the bus windows, consuming their only life-line.
The men from the trucks kept guard, their hardened expressions glowing in the blazing light, their guns and rifles ready, watching the buses reduce to burned-out metal shells.
Yesenia’s mother rocked in place on her heels, sobbing.
Yesenia wanted to run, but they had nowhere to go, and at least with the fire they were finally warm. Next to her, a frail, old man, eyes cloudy with cataracts, wailed up at the sky. “Does anyone in the world care if we all perish?”
Yesenia released her mother’s hand and whispered through clenched teeth. “No one cares. No one is paying attention to Aleppo.” That was one thing she knew for sure.
But she was wrong. Someone was paying attention.

Just outside Aleppo, in a hidden compound, one particularly dangerous and powerful man, Muhammad Al-Bahil, had taken note of the city’s tragic situation. Aleppo had become the perfect location for his sinister experiment.

Excerpt from Only Wrong Once by Jenifer Ruff 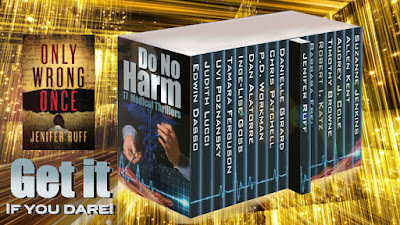 Posted by Uvi Poznansky at 7:25 PM