Do No Harm: Maya Hope by @authortimbrowne

Drip.
Drip.
Drip.
Blood pooled in his open chest cavity, overflowing onto his shredded shirt and dripping against the ancient stone altar. His once-tanned ashen face was a stark contrast to the crimson wounds across his lower chin and eyebrow. The flesh around his wrists was torn and raw having been tugged and bound by ropes. His lifeless body lay on its back, stretched over the stone; his face turned upward, as if pleading for mercy. The man’s chest, split between the ribs on the left side below the nipple, was flailed open and his heart removed in the traditional Way of the Maya ritual.
The jungle, silenced and confused by this horror not experienced in over 1,200 years, steeped in hushed tension.
When Danilo realized what the men had done, he jerked his head away from the scene and vomited hard. He staggered and glanced back at the dead man as if to verify what he’d seen, only to be confronted by an asylum of terror.
Sacrificial spirits spewed from the dark corners of the temple to merge with sulfuric fumes from hell itself to gorge on the unleashed evil. Wailing and shrieking filled the night as shadowy figures fought for dominance, dancing with fiendish delight and lapping the blood like wolves on a fresh kill. Stench and steam engulfed the demons and formed dark clouds obscuring the full moon that had illuminated the fresh corpse draped over the stone.
A thunderous legion of warring angels, dazzling with light, appeared in a brilliant bolt of lightning just as darkness had all but drained life from the jungle, sending the demons screeching to their hellish destiny and knocking Danilo off his footing. This was the moment Danilo knew that the dead man’s spirit left his body because evil had no right to claim a holy man.

The three killers lagged behind their hired local guide, Danilo Perez, who was being driven forward by the terror of the human heart in his backpack. He couldn’t shake the musty smell of wet moss that reeked with a strange sulfuric odor.
Above their heads, a howler monkey bellowed. It echoed the killing screams and encouraged other monkeys, insects and toads to join the chaotic choir, and the jungle cacophony returned.
Suddenly, a booming clap of thunder rattled Danilo, a searing strike of lightning shook the ground, and rain began to fall with a vengeance fiercer than this March rainy season. A torrent gushed from the sky, hitting the flora and fauna with a force that drowned the jungle sounds. Danilo looked through the towering canopy for the sliver of filtered moonlight, but it had vanished, giving way to frightening darkness as the storm devoured the jungle.
Water saturated every leaf, and Danilo wiped his face on his wet sleeve only to obscure his vision further.
While hacking a trail through the jungle with his machete, lead coursed through his veins, and his nostrils stung with the pungent smell of blood not even the rain could vanquish. He moved as fast as he could, hoping to distance himself from the ruthless killers with their strange accents and hardened faces as he led them back to their car. He squinted through the rain at the swaying treetops and tried to make sense of the shadowy figures overhead.
Maybe I’m seeing things.
He tried to quicken his pace, but every slash at the underbrush brought excruciating pain. His legs and arms grew heavy. As he forced his body to move, he remembered feeling this way once before.
As a young boy in Guatemala, during a horrifying vivid nightmare, he had experienced a visitation. He often wondered if it was the devil himself. He remembered feeling pinned to the bed—too heavy to move.
Now, in the impenetrable gloom of the storm he relived the nightmare, but this time it was worse—he couldn’t tell if it was rain that dripped down his back or the blood from his backpack that soaked him.
Why did I agree to lead these men? The money, of course.
But how could he have known he’d be carrying a human heart in his backpack?
He heard the men behind him utter what sounded like curses.
“Move!” one of them yelled.
Danilo wasn’t sure if he had been pushed or if he’d buckled from an explosive clap of thunder, but he found himself on his knees. 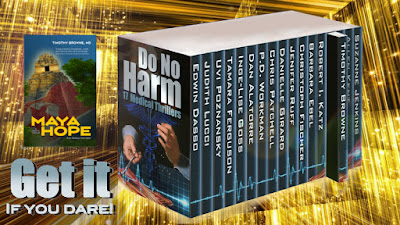 Posted by Uvi Poznansky at 7:45 PM