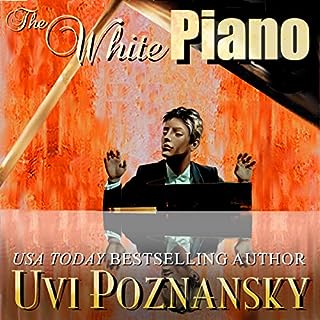 "The White Piano-- Still Life with Memories” is a poignant study of love, longing, and desire, painted with the masterful verbal brush of artist Uvi Poznansky. Through a series of memory sketches, the story’s narrator, Ben, recounts returning home after a ten-year absence to care for an ailing father. During the first night in his old bedroom, he recalls his mother’s exquisite playing of her treasured white grand piano, playing that symbolized the familial harmony he believed existed before an unexpected divorce drove his mother away.  Ben arises the next morning to a very different reality. The grand piano is still in the old family living room but is marred and left untuned. His mother, Natasha, has been replaced by a younger look-alike named Anita who can’t carry a tune, but has an earthy, seductive appeal that clashes with Ben’s memories of his demure and sophisticated mother. As his cantankerous father and alluring step-mother intrude into Ben’s memories, we learn that Ben’s idealized still life hasn’t been an accurate one at all – that disharmony was growing long before Ben left home, but for reasons he couldn’t have imagined. Characters who are only crudely drawn in Ben’s initial memory sketches develop much greater depth as they are colored with Poznansky’s skillful literary palette. As Ben discovers what truly separated his parents, he is aided by the uncultivated sensitivity of his mother’s replacement who serves to help bridge the deep divide that has grown between Ben and his father. In a final still life, the white piano returns to Natasha. But it is another simpler tune that begins to restore harmony to Ben’s final memory portrait. This is the fourth or fifth of Poznansky’s novels I have read. "The White Piano" maintains the literary standard of excellence I have come to expect from this talented artist. David Kudler’s strong and sensitive narration adds even greater color to this beautifully crafted study of a family’s longing to reconnect. I highly recommend the ‘Still life with Memories.’