His story sounds nostalgic, at first—but I know it is a prelude for a kill


“So, are you ready to spend your last moments with me? I promise not to disappoint.” Vlad leans over me from behind, his left arm tightening around my waist, his right elbow resting over the tip of my shoulder so as to steady his wrist, his control of the knife.

I try to swing my arm back and hit him, which only serves to make his grip more painful.

“What is the point of resisting me? Give it up, will you? I’m going to tell you a little story.” Vlad gives me one rough shake after another, which brings me to the verge of fainting.

When I come to, he presses on. “Long ago, when I was a child, my mother used to be a seamstress. I would watch her pluck pins out of the pincushion and mark the design on the fabric.”

His story sounds nostalgic, at first—but I know it is a prelude for a kill.

Next to my ear, he’s grinding his teeth. “Oh, how I hated her customers for nudging her to hurry! How I hated her for bowing down before them like a common servant! All for a few meager rubles. I was embarrassed by it. Infuriated.”

I say not a word, as I recall him sharing a childhood memory with Linda before slitting her throat.

“By the way my darling Mamushka averted her eyes from me, she probably knew how I felt,” he says, his voice cracking. “But she never acknowledged my hurt; never shared her own. Instead, she focused only on the stitch, on executing it with absolute precision. In a barely audible hiss, she would quote this Russian proverb, which has guided my hand ever since. ‘Measure seven times, cut once.’”

I can’t see his smile—but feel it, somehow, at my back, leaching into my flesh, sinking into my bones. He lets the blade hover over the base of my neck, barely coming into contact, barely imparting its cold touch.

“For you,” says Vlad, “I am willing to take things real slow, real gentle—not like I did with Linda.”

“Later.” He scores my skin, ever so lightly. “This is going to be real easy. Like slicing through butter.”

Hoping someone out there would hear me, I scream at the top of my lungs.

Vlad draws in a deep breath, which tells me how aroused he is, preparing for the slash. Just then, a sudden noise outside catches our attention. My body trembles; his shakes.

“What the hell was that?” he asks.

And now, here is that sound again, only louder. A second rock hits the window, this one busting it wide open, shards of glass sent spinning across the floor, one of them catching a dim ray of light.

Caught by surprise, Vlad inadvertently loosens his hold on me for a second, which is time enough for me to slip out of it, fall to my knees, and grasp the sharp fragment from the floor—at long last, a weapon!—which I slam, with all the power I can muster, right into his foot.

Yowling, he folds over. He tries to take a step, but the shard pins him in place. Tearing his foot away would free him—at the cost of cutting open the wound and causing even more damage. In torment, Vlad seems to have no courage for that.

Just in case he manages to muster it, I crawl away as fast as I can. Hands bleeding, I gather more glass splinters from the floor so if he comes after me, I can use them to fight him off. 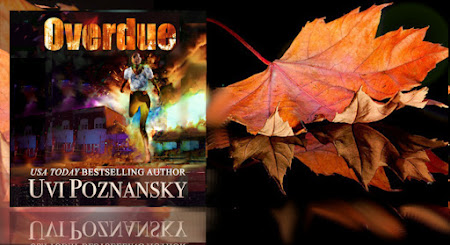 "Overdue, by Uvi Poznansky, is a thrilling ride through pandemic-ridden Los Angeles with a fiery heroine, the nastiest of villains, and plenty of heart-pounding action."
~Aaron P. Lazar, Audible reviewer
Posted by Uvi Poznansky at 12:50 PM