Is it my imagination, or am I actually hearing a voice? Barely audible, there it is, seeping in from above.

I’ve taken my eyes off of the child for a mere moment, and now—he’s gone! Either that, or he’s hiding. I run frantically through the yard, all around the perimeter, then in and out of the back gate in search of him. I bend down this way and that to check if his legs can be seen behind the bushes, if the Disneyland logo of his t-shirt peeks out, by any chance, between the branches. All the while, I keep calling his name at the top of my lungs. “Ready or not, Timmy, here I come!”
At last, “Okay, you win, Timmy!” I scream. “Where are you?”
There is this sinking feeling—not in my heart exactly but somewhere lower, in my gut—but I try ignore it. I cling to the hope that this is some kind of mischief, merely a hide-and-go-seek game, nothing else. Nothing more sinister.
But the fear persists.
I feel it in my belly.
What if I can’t find him? His mother entrusted him to my care. What on earth will I tell her?
I’ll never know how Tracy holds herself together despite the fateful blows her family has suffered: the strange disappearance of her older son, Brian, and the murder of her ex during that shooting spree. If Ed was targeted, then both she and Timmy are in danger. They may be on the killer’s target list.
Oh no, no, no! How could I allow this to happen?
“I’m counting to three, Timmy! Come out!” I cry. “One—two—”
Before the count is finished, I notice a small movement. Something scurries under the blades of grass, making them swoosh and rustle. Then, it shoots straight into the house through the open door.
Oh! A rat. The one Timmy has brought in with him. I hurry after the ugly thing, not so much because I want to catch it but rather because maybe the child may come—as he’s done before—to its rescue.
“Help me, Timmy!” I yell. “Your mouse, it’s getting away!”
The little rat leads me in zigzags across the living room, his long tail snaking around the floor, flicking every which way at the furniture—only to sneak, in the end, into the hole in the wall. Panting, I curse myself. Why haven’t I found the time to fix it?
Meanwhile, the child is nowhere to be seen, but next to the broken wall I notice something else, something quite remarkable: a fresh footprint, one that doesn’t belong to Timmy or to me, has just been pressed onto the recently cleaned floor. Taking a closer look, I think I recognize that sole.
Yes. It’s a Nike.
Panic stabs me in the stomach, which makes me double over. As my eyes close, sounds become sharper. I ask myself, what in the world is that? Is it my imagination, or am I actually hearing a voice? Barely audible, there it is, seeping in from above.
I crane my neck into the hole, then swing my legs into it. On the other side, I clasp the rail of the spiral staircase, trying not to make it clang as I climb onto the first step. Now, I perk my ears. In the murky space swirling around me, there it is: an eerie echo, reverberating.
Someone is upstairs right now. His voice is low, but from time to time it screeches up to a high pitch, which is horribly familiar.
What frightens me most of all is this: the punk is not even bothering to hide his presence. Clearly, he is prepared to see me. More than that, he is eager.
I clutch my cellphone, finger at the ready on the panic button. Shall I press the button now? I hover over it, telling myself to bide my time, wait for a critical moment. How will I recognize it? What is critical, exactly, and what isn’t?
I climb stealthily halfway up the staircase, which allows me to hear the punk a lot clearer.
Who is he talking to? 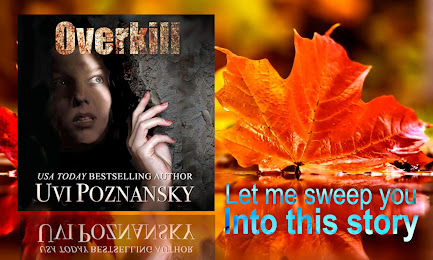 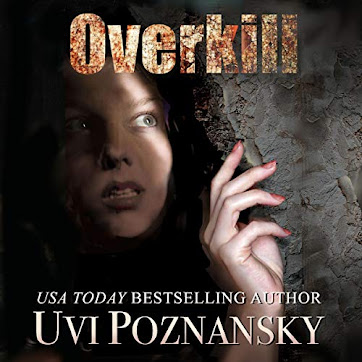 Posted by Uvi Poznansky at 9:11 PM