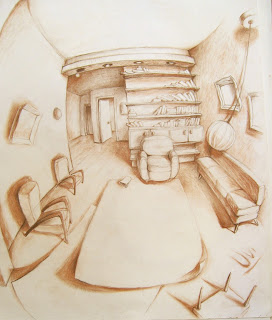 In this oil painting, which I used for the cover of the print edition of Home, I depicted a vision of the interior of where I grew up. The early sketches for the composition were done on a small note of paper on the first day of the Shiv-aa, the mourning period following my father's passing. By the time I came back home the note was lost, so I re-sketched it from memory. I prepared the canvas with a layer of textured bronze color, then worked the scene into it. 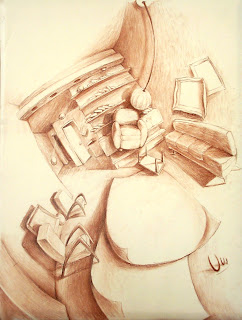 It was extremely difficult to photograph this piece, because the layer of gold--which is exposed in places--reflected light in unpredictable ways. So I snapped a photograph of the painting in one room, then another, with diffused daylight coming from the side, the front, the top, with and without flash, then took it outside and snapped it in sunlight, in the shadow, here, there and everywhere... Yes, you get the picture. 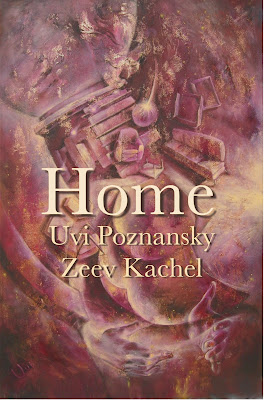 At last I found one version that looked fine to me. First I had to fit the image to a prescribed size (according the book size I have in mind.) Then I created the shadows of the lettering. You may notice that the shadow's color is not black, but rather it is the darkest purple of the painting (which can be seen in the lower left corner.) Also, I blurred these shadows, so they do not have hard edges, but fuzzy ones. Then I selected a soft yellow, with which I typed the title, Home; and a less bright version of this yellow, with which I typed my name and my father's. Being brighter, the title 'comes forward' in relationship to the author names.

Normally I would make sure that all text fields are of the same width, or that they are arranged in a way that the one on top has the shortest width, and the one at the bottom has the longest width, which creates a sense of stability. Not so here, because I view my childhood home through the shaky lens of memory...

For the audiobook cover I brightened the font color, so it stands out more over the painting. Also, because of the square dimensions I had to 'extend' the image of the painting to the right and to the left. And in addition to the authors' names, I added the name of the voice actress for the audiobook, Kathy Bell Denton. 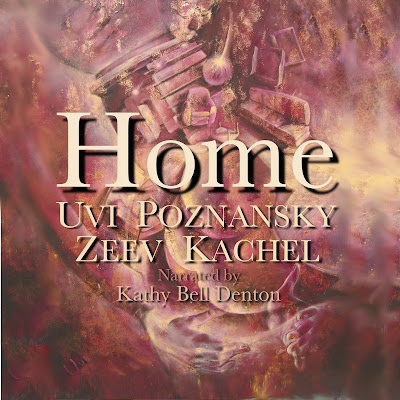 ★ Inspired by poetry? Treat yourself a gift ★

"The book overflows with some of the most eloquent poetic moments in print"
Posted by Uvi Poznansky at 7:29 PM